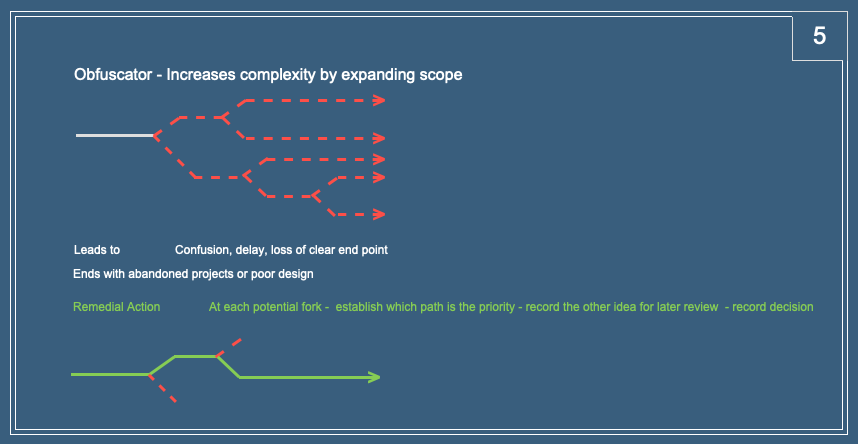 An Obfuscator sees every possibility and wants to cover all bases. For each proposed solution there are several options and all of them, they feel, needs to be addressed. At each meeting there are many more ideas and they keep on coming.

When this is positively intentioned the obfuscator wants to be sure that the project has considered all possibilities.

When this is negatively intentioned the obfuscator wants to complicate the project to either prolong it or demonstrate their skills and knowledge.

This type can make a huge contribution at the early stages of a project. They see all the things that a project could accomplish and can remember all the situations where are currently not ideal and which could be remedied. As this stage the motivation can be seen as them attempting to make things better.

When an obfuscator is involved throughout a project they can seriously derail it. Each issue or topic gets subdivided into sub topics which then get divided into further sub-topics and there is no discernment or attempt to prioritise any of them.

The project gets confused and so wide ranging that the key objectives get lost.

I worked on a project that suffered from many changes in project manager but it took a real turn for the worse when a new project manager came on board who was an obfuscator. I did not realise it at first as all the ideas were sound and appeared to be constructive, but as time went on it became clear that the intention was to prevent the project from completing.

In this case it was an architectural project and the “project manager” role was taken by the site foreman. Things were going wrong on site and to cover the problem the foreman started pointing out issues that appeared to be important. As I went about addressing each one he would come up with yet more issues that needed my attention and which, unless done, prevented any work from taking place. When the project manager’s staffing issues were finally resolved, the issues dried up and we got back on track. It took sometime to appreciate that the adding of complexity had been a ruse to buy time and distract me from what was really going on.

An obfuscator is best countered by always having a very clear brief, but even with one in hand, it is experience that is needed to spot when the obfuscator is at work.

At first it is hard to believe that a person will deliberately go out of their way to create pointless complexity or redundant work. With experience one knows that this is a possibility and you can quickly dismiss ideas being put forward that do not meet the main goals of the project.

When this type is at work and the technique is not stopped when revealed and discussed, it is time to replace the project manager. This can be tricky as the ideas put forward can appear to be reasonable and useful, so one has to be sure of the motivation and intention first.

If obfuscation is being done with good will then the action required is to help the person carryout their own evaluation of the ideas before they are presented so that they can validate the idea before meeting with others and so ensure that the ideas are “on point” and contribute to the success of the project.