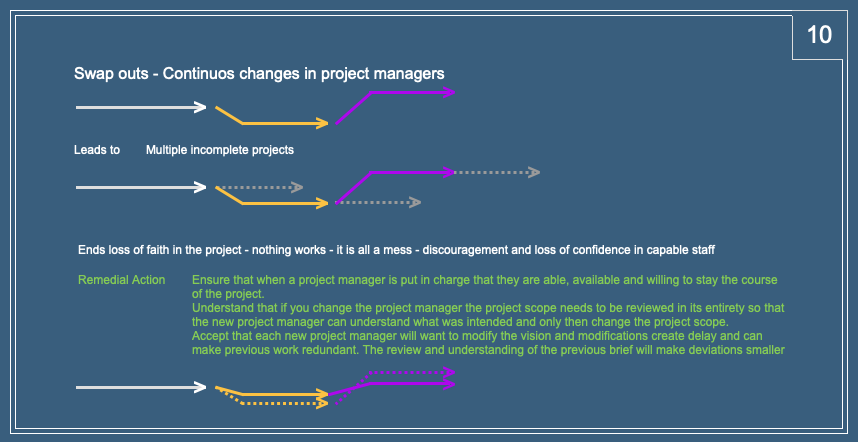 This is a situation arising from an

The project brief is created and the goals are set. As the project moves forward, the project manager is suddenly needed elsewhere or the boss decides that another manager who was not previously available would be better suited to the task. When this swap out is repeated several times the project disintegrates and/or goes way off track.

To make the best use of the staff available to manage a crisis of growth, collapse or poor recruiting systems.

Where a project lasts for years it is inevitable that mangers will come and go. New managers can revive the energy of the project and bring fresh ideas and new ambition.

Where a project is new it can be that by swapping out managers you are able to establish who is best suited to be involved with the project and this may not always be immediately apparent. However in this situation the swap outs need to come to an end pretty quickly.

If this situation is allowed to persist, the project is likely to go way off track or veer from one aspect to another with previous objectives left incomplete as each new manager steers the project towards their own vision.

The original scope of the project will be lost. Other parties involved with the project may lose momentum and focus and in turn they move their attention to other projects. The project is likely to have spiralling costs and could be so fragmented as to lead to it being abandoned.

I have seen this situation arise under two conditions:

1. The company is expanding rapidly and the project manager originally assigned to the project is considered too valuable and so is moved on to more important tasks. Then, either another staff member is asked to take over or worse a new staff member is brought in to run the project.

2. The company is failing and staff members need to be laid off. The project may be part of the recovery process but the attention is clearly stretched or elsewhere. Or it may be too late.

In both instances the importance of the project has diminished and its purpose (and the expected benefits) need to be re-quantified.

If this situation is occurring, the project is at risk and all investments made to date are likely to be wasted. The ideal is to review the objectives of the project, determine how important it is and what are the beneficial consequences of it continuing are, as opposed to either it being abandoned or having the project put on hold.

If the project is important and swapping out the manager is also considered vital, then it is essential that the new project manager understands the scope of the project and the reasons why the project was developed as described in the brief. If the new manager brings fresh ideas then these need to be be inserted into the brief and work may need to be halted until this has been done. Any new ideas are best run past the original project manger in case the ideas were considered but rejected for reasons that remain valid but which have been forgotten.

If the new manager is a new recruit, even with near identical past experience in another company, they need to adopt and adapt to the culture and ethos of the company they have joined. With new companies this may be harder to define, but the risk is that the new manager attempts to re-create the style of their previous place of work which may not be desirable.

This situation is created by the boss and therefore it needs some of their attention to resolve the priorities.