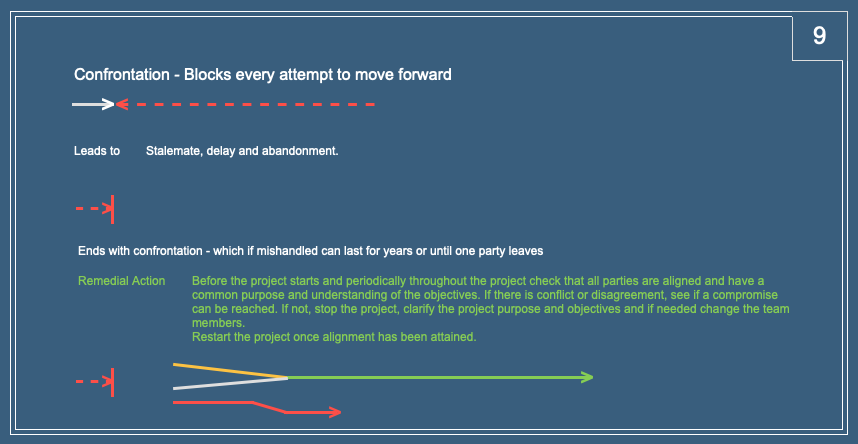 A confrontational project manager has a disagreement with

– the purpose of the project or

– does not have the skills required to see it through or

– has a personal dislike of one or all of the members of the team working on the project.

They need not necessarily be the lead project manager. What they do is stop everything by withholding their labour, attention, information or approvals. They may postpone meetings, block the purchase of key resources and they can undermine your reputation with the boss.

This person can be the boss of the company. If this is the case then they have reached their ceiling of competence and the new project, though necessary, is beyond their current abilities to implement and there is a risk that it will expose a fear of having a perceived flaw in their character.

Stop this at any cost and blame the circumstances or others.

This is a cry for help. This person is successful and they have a need for the project, but they do not have the knowledge needed to carry it through. Given the right support and help this can be turned around and this can create a friend for life.

If the person is not willing to discuss the situation or accept help there is no future for the project and if this is the boss the whole company is in jeopardy. At a personal level this is a high risk to be a part of. When the project fails, it may be hard to discern why it went wrong and you may be tempted to take on the blame. You might get stuck in the loop of “if only I had…” It may be that the project manager deflects blame onto you.

If you are the person creating the confrontation – seek help – if you do not you will either be forever avoiding this type of situation which will hold you back or you will be forced to endure similar situations over and over again.

For the most part I work with non IT people. They are managers and designers, accountants and administrators. They know that they do not know how to create a system and so they are willing to hand over control to me to get the work done.

In the case of one project, my “client” was the head of IT and he felt that he needed to know how things worked to the extent that if he chose to, he could do the work himself. He was a very busy guy and managed a network of over 100 PC computers on his own. He did not have time to learn database development and as the project moved forward he felt more and more out of control. Even though I was the person responsible for the work, he was worried that if the system failed it would fall back on him to take over. A thing he could not do.

It took a while for me to work out why the project was so hard to move forward, it seemed to be thwarted at every stage and the attitude of the other staff members changed in unexpected ways. I finally managed to have a one to one meeting with the manager and I managed to bite my tongue, stay quiet and listen to his concerns.  Then, and with the essential agreement of the manager, I arranged a three way meeting between the IT manager and his boss  and myself. We clarified what aspects of the system each person would be responsible for and produced a document stating the conclusions. Having this open discussion with the boss, the IT manager could be absolved of any responsibility that he felt unable or unwilling to assume. The blocks were removed and the project was delivered.

Find out who is blocking the project, find out gently what the fear is. It could be fear of exposure of absent skills or abilities, fear of being made redundant, fear of being overworked or replaced. Talk it through – privately! If you get this right you are unlikely to be thanked, as this needs to be very much behind the scenes, but all parties will benefit.