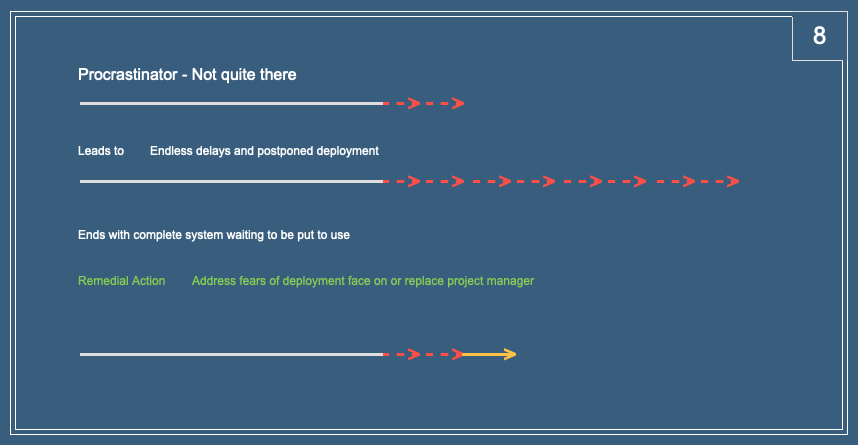 The project is complete, amendments have been carried out, user feed back has been obtained, but somehow the project does not go live. The procrastinator always finds a reason for further delays.

It is important that the project works and, if a delay is legitimate, then it makes sense to delay the push of the button until the project is ready to go “live”.

The procrastinator project manager or boss is worried but cannot express their concern. They have had a great idea but now it means testing it in the real world. Once it is out there then it is harder to withdraw it. These concerns could be well founded, in which case more research and feedback may allay the fears but sometimes there is no way of knowing if the project works until it is put to the test.

I created a system in partnership with a client, it was a sophisticated marketing tool connecting precisely defined marketing material with customer profiles based on the very latest downloaded data. There were to modes of operation – spam or targeted e-mails. The targeted version matched a product with a specific client type based on time sensitive data. We are now used to having adds pop up on LinkedIn and facebook after visiting a non-related web site – this system served this function before facebook had really taken off. At the time if felt very intrusive and “big brotherish”. Now we take it for granted. It also had a campaign feature where the prospective client would be fed a series of emails over a period of days building a story of the services on offer.

When the system was ready the client never quite used the targeted version and so the real benefit and head start we had over the competition was never put to use. The fear was that the prospective clients would be alienated by the degree of perceived intrusion and insider knowledge even though the data was in the public domain. The button never got pressed.

With a custom solution the idea is that nothing like it exists, making it go live is exposing yourself to criticism and judgement. There is no avoiding it and no matter how hard you work you will always be criticised. It goes with the territory of the new. My clients are used to the exposure of their own work and can counter any criticism or objections thanks to their expertise. But when they involve me then they are being judged by the work I have done. This is unfamiliar territory and requires one further step of “letting go”.

Where procrastination is discovered, explore with the manager the reasons why the project should not go ahead. Use past experience to run through all the the possible reasons why a project of this type might want to be delayed. R remember that this may expose a fundamental vulnerability or sensitivity within the manager or company. Do this in a one to one meeting and tread lightly.