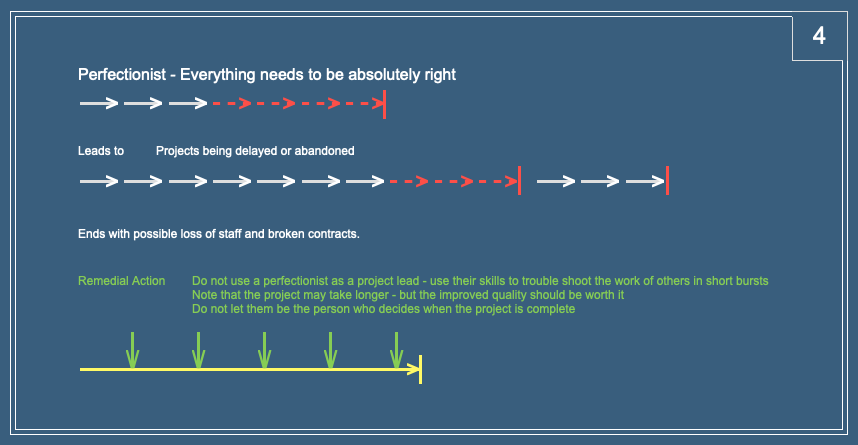 Perfectionists will be heard saying:

“Nothing is complete until every aspect is just right.”

“We cannot move forward until it is flawless.”

“Give in one more go”

Getting a project to be functional, great looking, intuitive but within a budget and within time constraints, means that it will not be perfect.

If time constraints and budget were not an issue there would still be a moment in time where removing any more flaws would be so expensive for the marginal gain that everyone, even the perfectionist, calls it quits.

The issue is: when is the right time to compromise and when to push for a better result?

This has to be perfect

If a project is full of bugs the users will either reject it or the functionality will not provide the benefits that were described in the brief. The project does need to achieve the objectives of the brief and this person will make sure that happens.

A determined perfectionist is a major obstruction to progress. If your project is to get a crew to the moon and back safely then there is no option but to get things to be as near to perfect as is humanly possible.

If the objective is less sensitive, then there needs to be level of perfectionism that allows for progress, for refinement over time and that allows concepts to get ironed out.

If the perfectionist stops a project moving forward until all aspects of the first stage are perfect then there is a risk that later stages undo this hard won perfection. As each stage is created there can be impacts on previous stages and so with a strict perfectionist in charge a project can get into a tighter and tighter loop of change and corrections that brings the project to a standstill.

In my early days as a software developer I worked with a perfectionist. He worked for an architectural firm and the work they produced was exquisite. It could only be that way because of their attention to detail.

In those says I also had quite a lot of attention to things being just so and together we spent hours on refining the layouts of the system being created to manage all of the administrative tasks of the company. We spend more than hours, we spent days. Then finally we were able to move onto the next stage. We then found that some new requirement had to break the carefully set up rules from the previous stage and so we went back to and reworked the layouts. This would happen with each new administrative subject.

A second requirement was that the whole system had to be ready and it was to be implement over the whole company in one overnight procedure. So all parts had to be perfect.

We never got there. The re-workings went on for months and then it was realised that the whole company could not risk one, over night, switch-over. What if it went wrong. The cost of making all parts perfect killed the project,

Perfectionists are needed – they see things that others do not and they make things not only function better but look better. A full time perfectionist project manager will cause projects to overrun or get abandoned. If, however, a perfectionist is asked to contribute to a project, cast their eyes over what has been done and add their comments, then the project can be improved without grinding it to a standstill.

Plan to bring in your perfectionist to pre-set and time constrained meetings. Accept that a lot of what you have done will not meet their standards and when they leave (a kindness as they being present as you purposefully decide not to be perfect may upset them) decide which of their suggestions will be addressed and which ones you are willing to live with.

Do not let them be the ones to decide when the project is complete. It is unlikely to get there.