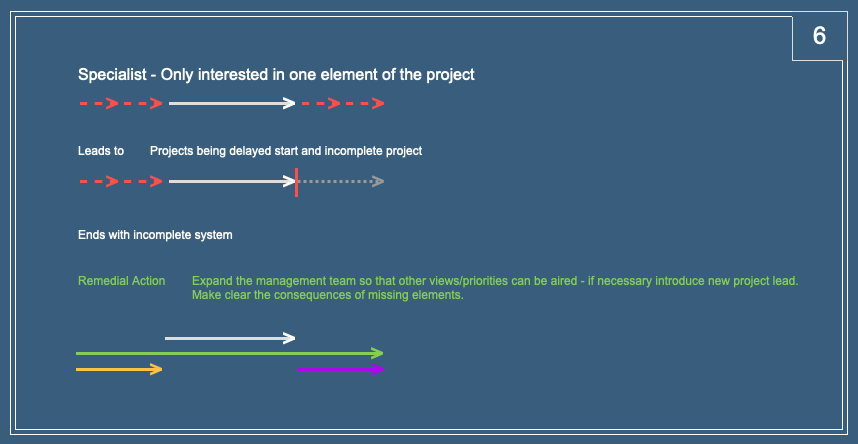 A specialist is highly skilled in their aspect of a proposed project. They may have been asked to oversee a large project of which their department will be the major user, but other departments will also benefit from and therefore need to be involved.

However it soon becomes clear that they are less than interested in the parts that do not directly affect them. They concentrate all their attention on their own elements and the other sections get ignored. It can be that they spend enough attention on the part of the project that does not directly concern to them but is needed in order for them to be able to perform their duties.

This results in a highly developed core but with withered extremities.

What do I need?

A specialist project manger is likely to be very precise in what they need for their area. They will have thought it through and know what works and what does not. They will have a clear idea on what needs to happen before they get involved but little about what happens after they have done their part. It is likely, but not certain, that their part will be one of the best parts of the total design.

If the specialist is the project manager for the whole system then it will not work. The part that they care about will be excellent but, as they have not allowed for the needs of others to be addressed, these other parts will most likely be deficient or not even addressed. Since this is the case the project will most likely not be used or will be seen as a failure by the others users/departments and rightly so.

In my experience in software development this happens most often when the accounts department are the project managers. Sorry – but that has been the case in at least three projects. The accounts department sometimes believe that they know about everything that goes on in a business. But there is, of course, a lot that happens that does not relate to the movement of money.

They had little or no interest in how the income was generated and very jealous and questioning of any expenditure. Accounts departments are usually very busy and so they had very little interest in knowing more. They were very happy with the system but the sales, marketing and fulfilment departments wondered why the system existed as they were not getting much benefit from it. When the project manager was replaced with another from one of the other departments the same was repeated in their area of expertise.

Specialists are gold dust. As I have mentioned, they are most likely to know immediately if an idea is good or bad and they know if the idea, once implemented, will be used or  just be “fluff”. However, they will only know one aspect of the business and so they cannot be allowed to be the lead project manager. There is need for a generalist to project manage a number of specialists, each of which can contribute ideas for their area of the project and, essentially, the interface between their area and the preceding steps and consequential steps.

If you have a specialist in charge of a project, and their skill set covers only one aspect of the project, you need to find a new lead. The lead project manager needs to understand the purpose of the project and make use of the refined knowledge of a specialist from each department involved with the project.